First off, preparing for this massive event didn’t take place for me until about 3 days before our flight to Toronto (next destination being Indianapolis, Indiana). I’m not sure what it is about me or if everyone is like this, but I HATE packing, not just a little either. For me, preparing clothes and other necessities for a week in a place where if you don’t have what you need you either ask someone for it or get along without it, isn’t too easy. Most of the things that mom says were necessary and that I shook off as otherwise, turned out to be much needed while I was there…

Besides my struggles at making responsible packing

decisions, the traveling was pretty straight forward, for the most part. The first day we took 2 trains up to Paris where we took our flight to Toronto the next day. Arriving at Toronto we were greeted with a MASSIVE culture shock, everyone… was so nice! During our 5 hour layover, we went to go get some bagels, in the process of ordering the lady asks, “And what kind of bagel would you like sweetie?”. I had to step back and soak in this unexpected endearing phrase. We saw people making conversation with complete strangers meeting for the first time!

Finally arriving in Indianapolis we spent one day just relaxing, recovering from jet-lag and exploring around the hotel and the mall connected with our hotel. Tuesday we had our first meal together with all the other missionary kids  we were going to be staying with during the three day event. This first meal, advanced my whiteness level as a person, yes… I had Chipotle! for the very first time in my life and it surely did not disappoint! I ended up having about two burritos, which made up about 2,000 calories in a single meal. That was also something I noticed while in the States, in all the fast food restaurants they show the amount of calories for every meal, I guess for those who try and watch their calorie intake… sooo yea nothing that concerns me at the moment.

Wednesday night was the first service of the event. This first sermon titled, “The Faith

Factor” really impacted me. He talked about the things we would be capable to accomplish if our fear didn’t play a role in the decisions we make. Myself being generally bashful when it comes to sharing my faith openly, it really made me want me to change that stumbling block about myself. 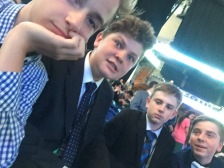 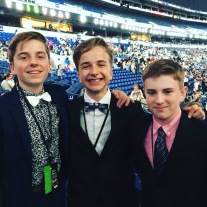 During the few days I got to meet up with lots of my old friends from Canada, and though it had been years since I had seen them, it felt as if we were ever apart.

My roommates for NAYC17 probably doubled the amount of fun I had overall. They were all super cool to hang out with and all spiritually driven! I don’t know how to say how much I enjoyed hanging out with all of the MK’s. Everyone was so inclusive, no one was left out of things, they were all just really genuine. Getting to hear about the different cultures every one of them come from is mind opening when I think about it. Sometimes I forgot that we’re not the only family out in a foreign country dealing with

extreme culture shocks. In France I can tell you that ain’t no cashier making small talk with you as you check out your groceries, ain’t no Frenchman gonna comment on how fly you lookin’ in your freshly pressed suit, and sure as anything, ain’t no random person behind you in the line for McDonalds gonna introduce themselves, tell you where they’re from and them ask you who you are and why your where you are!

Annnyway, I could go on and on about how extremely nice the people were how awesomely powerful the services were, and how good the food was, but what’s the fun in that? There’s always another one in 2019 that’s going to be bigger and better, because people who have been going to this event for a while always say the next one is always better. Because something like this can only improve, right?